You are here: Home » Great days out » Rave-A-Roo, Family Festival 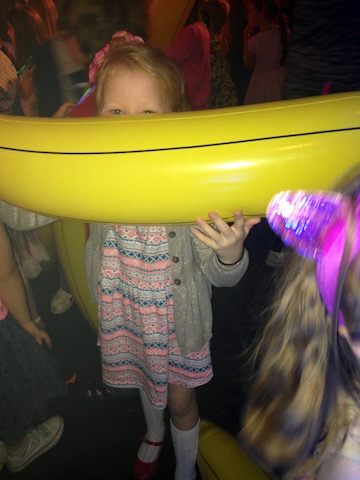 Congratulations to Melanie Whitfield from Basildon and Elvina Ebrahimifar from Sutton who won family tickets to Saturday's Rave-A-Roo experience. We hope they enjoyed themselves as much as Harriet and I did. We attended the second of the two-hour sessions.

Not knowing what to expect we were surprised by the long queue outside The Ministry of Sound in London but once the doors opened we were soon inside the building. The night club venue is transformed for families to enjoy disco, various play areas and chill out zones with a bar selling alcoholic drinks (bottle of Prosecco £15) for parents plus coffees and teas and soft drinks. A nice touch in the toilets was the positioning of little steps for junior clients plus there were plenty of baby changing areas. 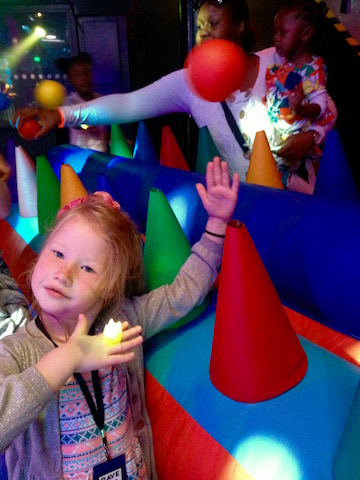 Harriet was entranced with the air juggling which certainly engaged a lot of children. Then we went into the main room where there were banana balloons. One willing dad allowed himself to be dressed as a banana and undergo a barrage of attacks from excited children. One downside was that there were not enough balloons to go around – a disappointment for Harriet to did manage to pick one up later.

The Rave-A-Roo team got the party started, encouraging the kids to join in the dance routines and GoGoGo from Nick Jr were great and engaged with the young audience aged from quite small babies up to the age of 11.

After at least two weeks of depressing news it was a joy to be in a place where people of all hues and ethnicity were smiling and laughing (bar a few tears from tired little ones) together in a relaxed and joyful atmosphere.

About halfway through, Harriet decided to have a change of tempo and went to play with the neon modelling clay for a while. She was also hungry but they had sold out of snacks which was an unexpected drawback.

Returning to the main room, the session was building up to the finale with confetti being cascaded into the audience to the delight of the excited and excitable children.

I enjoyed the event far more than I had anticipated and Harriet had a great time although I think this would have been enhanced if I had taken one of her friends with us.

Visit the Rave-A-Roo website for information on dates and tickets.