You are here: Home » Great days out » Hogwarts in the Snow

Hogwarts in the Snow 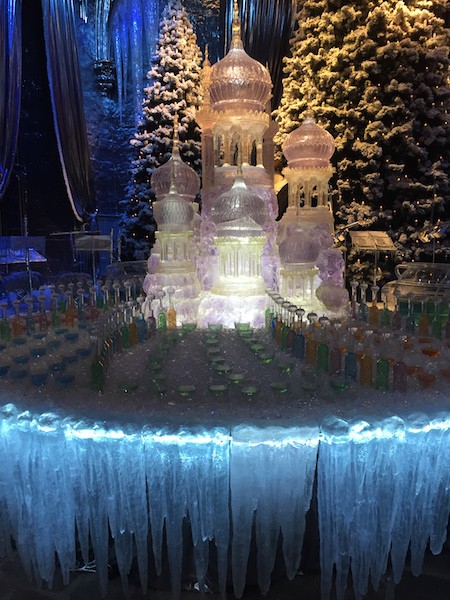 If you are a Potter fan, this is the experience – Hogwarts in the Snow, at Warner Bros. Studio Tour London – for you. And I certainly am a Potter fan!

The festive evening began as we entered the Warner Bros Studio, greeted by a beautiful Christmas Tree. The tour then began with a short montage of all eight Harry Potter films to whet our appetite.

The screen then rose and we were invited to walk through the doors to the Great Hall. The Hall was decorated and lined with the four house tables – Griffindor, Hufflepuff, Ravenclaw and Slytheryn – laden with food.

Next stop was the make up and costume of various cast members, and a live demo of making up characters to look magical or mystical, such as Bellatrix Lestrange. Everything down to the teeth were thought about in intricate detail. It was amazing to see how much detail went into each small aspect of every character.

We also got to experience the work of the hidden heros of the films, from production to the artists, who are all amazingly talented and without whom the films could never have been so brilliant.

From flying car to Whomping Willow,  Griffindor Common Room to The Ministry of Magic, The Hogwarts Express to Dumbledore’s Office, our attention was riveted all the way around the studio. If you want to fly on a broomstick – you can!

Or you can warm up with a Butter Beer (a bit sweet for me!) before heading outside to visit The Knight Bus and Privet Drive.

The Hogwarts in the Snow model at the end was so amazing and a real treat to see.

The hosts were exceptional and the canapés were a wonderful addition to the evening which was relaxed and we were able to spend as much time as we liked looking at all the different aspects of Harry Potter.

If you are going during the day and want photographs on a broomstick or on The Hogwarts Express be prepared to queue! (And take your credit card as the pictures aren’t cheap. We were lucky and got ours free as part of the evening experience. A nice addition to our mantel piece!)

Tickets must be purchased in advance and you should arrive 20 minutes prior to your ticketed time. Before your tour begins you will have access to the Lobby Café, Studio Shop, cloakroom and toilet facilities. Those arriving after the last tour of the day cannot be guaranteed entry.