You are here: Home » Freebies, offers & competitions » Win The Big Bad Fox and Other Tales on DVD

Win The Big Bad Fox and Other Tales on DVD 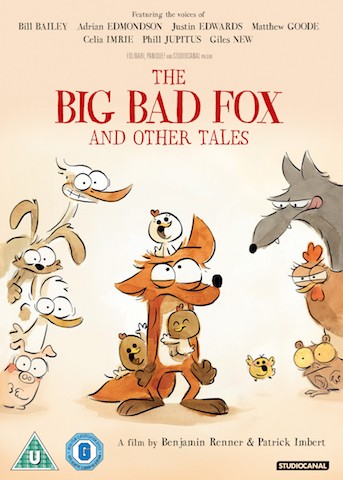 Courtesy of StudioCanal and featuring a host of voices from the world of British comedy, including Bill Bailey, Adrian Edmondson, Justin Edwards, Matthew Goode, Celia Imrie, Phill Jupitus and Giles New, the animated family adventure The Big Bad Fox and Other Tales will sleigh onto DVD and Digital Download from 26 November 2018, and includes a "We Must Save Christmas" special.

From the creators of the Academy Award®-nominated Earnest and Celestine, The Big Bad Fox and Other Tales is a hilarious adventure about a gang of animal misfits. Told through beautiful hand-drawn animation, the story unfolds around these lovable countryside creatures as they try (and fail) to fulfil their traditional roles in the farm and the forest.

A lazy stork leaves the delivery of a baby in the care of a rabbit, a pig and a duck. A big, bad fox tries to live up to his reputation whilst he unwittingly adopts three confused baby chicks, and – in the film’s final tale – the animals embark on a hair-brained scheme to replace Father Christmas…

If you'd like to be in with a chance of winning this DVD, just answer this question:

Who does the stork leave to deliver a baby?

Please write The Big Bad Fox and Other Tales in the subject line of your email and include all your contact details.

The winners will be the senders of the first six emails opened at random after 12pm on Monday 10 December, 2018. Only one entry per household.