You are here: Home » Cinema/theatre/TV » Book Story by MONSTRO Theatre 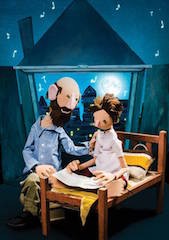 MONSTRO Theatre will be touring the UK with Book Story – a play celebrating books, reading and libraries.

This is the tale of some books, in a library. But these are no ordinary books and this is no ordinary library. It’s Brian’s library: a wonderful, magical place where the books like to flutter their pages and let their shelves go…

Funny, surreal and completely unpredictable, Book Story uses puppetry to engage children with the challenges of the digital age and explore our deep fondness for the simpler age of the page.

MONSTRO Theatre MONSTRO is led by composer and theatre-maker Ben Glasstone, winner of the 2017 MTI Stiles and Drewe Award. Ben has composed and directed many successful musical shows for Little Angel, Polka, Unicorn, RSC and others, including The Mouse Queen which toured off-West End and off-Broadway in New York. Following the success of Mouse Queen and other shows, Ben set up MONSTRO with several of his closest collaborators to make work aimed at engaging adults and children in tandem.