You are here: Home » Cinema/theatre/TV » Horrible Histories – The Best of Barmy Britain

Neal Foster leads Birmingham Stage Company and stars alongside Alison Fitzjohn. We all want to meet people from history. The trouble is everyone is dead but here prepare to meet your favourite characters from our barmy past to celebrate the 5th Anniversary of Barmy Britain in the West End.

Could you beat battling Boudicca? Will King John be a martyr for the Magna Carta? Will you lose your heart or your head to Henry VIII? Can Parliament survive gunpowder Guy? Light up your life with the great fire of London! Escape the clutches of Burke and Hare and move to the groove with party Queen Victoria. It’s the history of Britain with the nasty bits left in!

Harriet and I loved it. "It was so funny," said Harriet who described how a boy form the audience was called up on stage and "was cut in half. The put him together again and it wasn't scary."

There were lots of references to Brexit to entertain the adults. 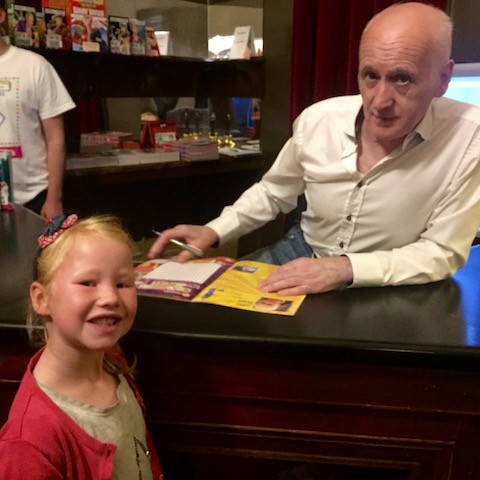 For Harriet, at this special press preformance, there was the added excitement of meeting Terry Deary, the creator of Horrible Histories, and one of Britain's best-selling authors of the 21st Century.

In addition to this, other BSC Horrible Histories productions include Wicked Warwick at Warwick Castle until September, and Horrible Christmas returns this winter for a five-week season at The Lowry from 7 December to 8 January. Horrible Histories are recommended for ages 5 to 106! (107 year olds may not like it as much).

Ticket prices: £22, £19.50, £15 Booking fees apply for all on-line and phone bookings, and all tickets include a 50p restoration levy There are no booking fees for tickets purchased in person at the theatre