You are here: Home » Books: children & YA » Hannah the Spanner Books by Stuart Simmonds and Bill Greenhead

Hannah the Spanner Books by Stuart Simmonds and Bill Greenhead 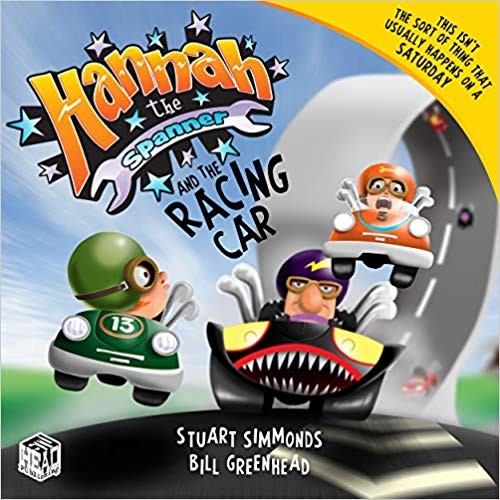 Hannah the Spanner series written by Stuart Simmonds and illustrated by Bill Greenhead. is popular judging by the reviews on Amazon. Created by a father for his daughter the stories are fun and witty and the illustrations are full of life and colour.

A school trip to London and Hannah's class coach is stopped by police looking for two thieves who had broken into the Bank on London. Mr Bishop is relieved to hear they weren't looking for a red-headed boy, Aubrey, making faces out of the window on the motorway. Once they arrive at the museum, Aubrey gets up to no end of tricks so that Mr Bishop fixed his GPS tracker on the schoolboy's head which turned out to be a very wise move...

Hannah's invitation to her friend Norris's birthday party was exciting. He lived on a farm and his dad had been a famous racing driver who had built the Track of Doom on his land for his strange friends the Doom Crew. He rather hoped his son would follow in his footsteps and so for his Norris's birthday he provided a race track and small electric cars – while he and his  after the birthday tea, what could possibly go wrong?

Both books are great for adults to read to children, or more independent readers to chuckle along to.

Hannah the Spanner and the Diamond Robbery

Hannah the Spanner and the Racing Car

are available to order on Amazon.