You are here: Home » Books: children & YA » Passing The Torch by Mary Peters

Passing The Torch by Mary Peters 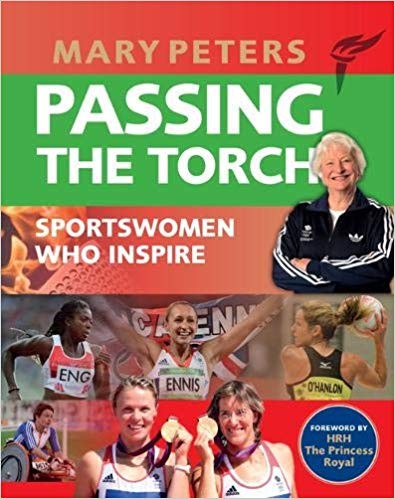 The first book I wrote was called Women and Sport in the Women in History series published by Wayland. It was a slim tome charting women's sporting prowess from 1840 up until the 1980s. Mary Peters featured in the chapter on "Role Models and Superstars".

It seems fitting that I should pass the baton to this wonderful sportswoman who has written an inspiring and fascinating book about women athletes, Passing The Torch.

When Mary Peters went to the Olympic Games in Munich in 1972 she firmly believed that she could win the pentathlon gold medal. Not many others shared her conviction. She had finished only fourth and ninth in the previous two Olympics and at 33 years old, she was considered to be past her best. Her ultimate victory in Munich not only rocketed her to the height of sporting legend but her mental toughness, self-belief and her committed fundraising for the Mary Peters Trust ever since, have inspired a generation of women.

Passing The Torch is a collection of interviews with past and present sportswomen across a variety of disciplines, all sharing with Mary the highs and lows of their careers and the motivation that propels them forward. Each athlete shares how she became involved in her sport and her inspiration, some share memories and what they are doing now. All their achievements are documented.

It is a book to excite and inspire a new generation of girls to take up sport and to experience the many benefits that it can bring including confidence, camaraderie and particularly important to Mary, physical strength.

Among the interviewees are the Dames Kelly Holmes and Jessica Ennis-Hill, Beth Tweddle, Sue Barker, Fatima Whitbread and Rebecca Adlington. There are also interviews with less well-known women but whose stories are equally enlightening about the challenges they faced over their male counterparts. For instance, Rachel Fenwick, who represented GB in the 1976 Olympics in Montreal for Archery, shared, “I remember at one shoot the fastening on my bra broke. A friend offered to repair it with a safety pin but when I was at full draw with the bow, the pin opened and stuck in my back bone. I remember thinking: “Do I release the arrow or come down and start again?” Either way, it was painful!”

This book is for anyone wanting to read about the relentless determination of women on the road to achieving their sporting goals, to be wowed by the courage of people like Maria Costello who broke 24 bones in her body to become a record breaking motor-cycle racer, and heartened by women like Tracy Edwards who was expelled from school age 15 after the tragic loss of her father but still found her purpose in sailing, coming second in the Whitbread Round the World Race and becoming the first woman to win the Yachtsman of the Year Trophy in 1990.

All the interviews, including Mary’s own story, of practicing on a home-made high jump and hurdle, epitomise the grit and focus required to succeed in sport, but also the huge joy and opportunity it brought to all of their lives. As Mary says in the introduction, “My message to all young people is: If you have talent, or even if you haven’t, have a go. The opportunity for friendship, travel and good health is one which can never be replaced.”

Even if the reader has no aspirations in the sporting field, the principles for getting on in any area are the same: determination, courage, focus and application as well as hard work.

is published by Gateway Publishing Ltd and is available from Amazon and bookshops.