Despicable Me 3 on DVD 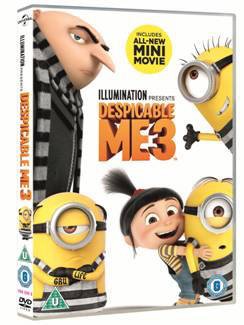 The mischievous Minions hope that Gru will return to a life of crime after the new boss of the Anti-Villain League fires him. Instead, Gru decides to remain retired and travel to Freedonia to meet his long-lost twin brother for the first time. The reunited siblings soon find themselves in an uneasy alliance to take down the elusive Balthazar Bratt, a former 1980s child star who seeks revenge against the world...

Harriet aged seven writes: "Despicable Me 3 was scary but very, very funny. Lucy is really pretty but she has a very pointy nose like her husband Gru. Their three daughters are called Margo, Edith and Agnes and there are loads of cute Minions who speak a different language.

"I really loved this film."

This heartwarming comedy provides hours of family fun with almost an entire hour of exclusive bonus features including:

Deleted Scene — With intro by Dana Gaier, the voice of Edith

Character Profiles — The inside scoop on the most popular characters, from the actors who play them

Developing Dru — Behind the scenes character development of Dru

The AVL Files — Through the lens of the Anti-Villain League’s hi-tech database, this ultra secret, interactive surveillance briefing showcases all of the agency’s amazing creations and top agents

Despicable Me 3 makes a perfect Christmas present or a pre Christmas treat for some wind-down time.