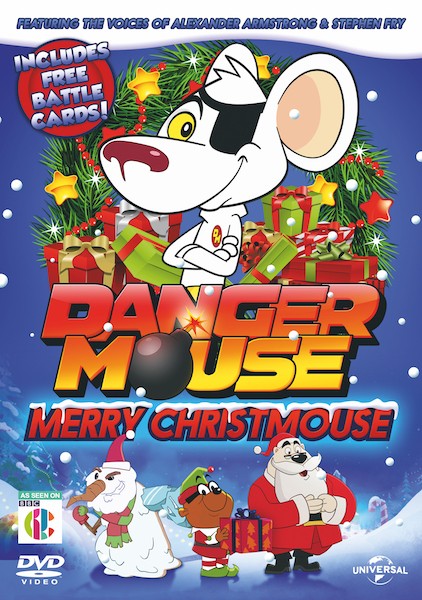 I hadn't realised that Harriet was such a Danger Mouse fan. She was eager to view the new DVD and loved explaining situations and characters to me.

In a whirlwind of bah and humbug the Snowman sabotages the festive holiday and threatens to destroy the world by freezing the sun.  Danger Mouse must lead an army of elves and a rejuvenated Santa to battle the Snowman and melt his evil plans.

There are six other episodes:

Each one had Harriet laughing out loud, squelaing with delight and thoroughly enjoying herself. We watched from start to finish, but these gems are perfect to watch singly for some wind-down time.

Danger Mouse (Alexander Armstrong) and Penfold (Kevin Eldon) work together to save the world, the alternate universe and Willesden Green. The two best friends take on all new, death defying, secret missions from deep in their hidden London location, beneath the post box, set by cool-headed Colonel K (Stephen Fry), the Head of the British Secret Service. Dave Lamb brings his uniquely sardonic wit to the series in the role of "The Narrator".

Perfect stocking-filler or pre-Christmas treat to get into the festive mood.