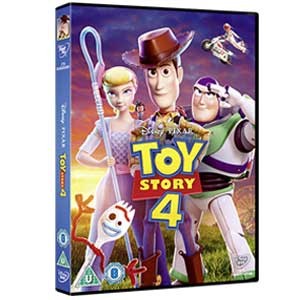 Disney and Pixar’s Toy Story 4 takes audiences on a hilarious and heartwarming road trip with Woody, Buzz Lightyear and the whole gang, plus some new faces, on Digital in 4K Ultra HD™ HD, and on 4K Ultra HD™, Blu-ray™ and DVD.

The fourth instalment of this iconic narrative picks up on past themes which began in the world’s first fully computer-animated feature film released nearly 25 years ago and takes them a stage further. Toys feel the pain of not being chosen, being forgotten and unloved plus the grief and loss when some of their number are passed on to the charity shop (or worse).

In Toy Story 4 Woody (voice of Tom Hanks), is confident about his place in the world, and his priority is taking care of his kid, whether that’s Andy or Bonnie. So, when Bonnie’s beloved new craft-project-turned-toy Forky (voice of Tony Hale) calls himself “trash”, Woody decides to teach Forky how to embrace being a toy. But a road-trip adventure, including an unexpected reunion with his long-lost friend Bo Peep (voice of Annie Potts), shows Woody how big the world can be for a toy. In addition, carnival prizes Ducky (voice of Keegan-Michael Key) and Bunny (voice of Jordan Peele) bring a new level of fun to the film.

For those who find "life-like" dolls creepy, your fears are justified in Gabby Gabby (Christina Hendricks) who resides in the antiques shop with her henchmen. However in predictable "happy ever after" tradition even she finds – and offers – happiness. I know I'm not the only adult who shed a tear at the ending. And do keep watching as the credits roll – more treats are in store.

are both available from Amazon.

We have one copy of Toy Story 4 on Blu-ray™ to be won.

Blu-ray bonuses include the cast and crew sharing their love of toys; a collection of mini-docs on the film’s memorable new characters, featuring the voice actors, director Josh Cooley and Pixar artists talking about the many elements that make these characters fun and lovable and deleted scenes.

To be in with a chance of winning just write Toy Story in the subject line of your email and answer this question:

Who is the voice of Gabby Gabby?

Only one entry per household. The winner will be the sender of the first correct email opened at random after 12pm on Tuesday 26 November, 2019.