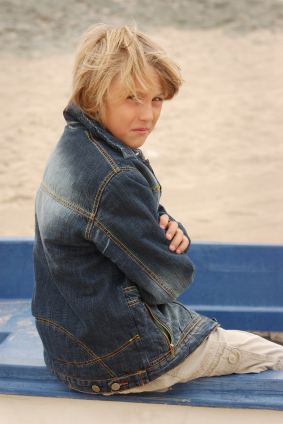 How sad for your son – at the moment he sounds angry and unhappy and doesn’t know how to deal with his emotions, hence the strops. From your letter, these seem to be a new development so has anything else changed in his life? Are there any problems at school, has he fallen out with his best friend, been dropped from the football team? Is he being teased or bullied?

Talk to him about how he is feeling, don’t worry if he doesn’t say much but give him the chance to speak and, most importantly, you must listen. Tell him how sad it makes you feel when he has a strop because he doesn’t normally behave like that and apologise for occasions when you’ve got angry with him – that opens up the way for him to apologise to you as well.

If there is a particular thing he’s worried about, talk about it and ask him how he thinks the situation could be improved. If he says he doesn’t know, make some suggestions yourself but let him lead the discussion, if possible. In a simple way you must let him know that you are there for him, that if something is making him unhappy, you will help him sort it out – that’s what parents are for.

It may just be a bit of sibling rivalry - he feels his little sister gets all the attention – even if it isn’t so he may feel this - and by behaving badly the spotlight is back on him. At nine he probably felt far too old (and embarrassed!) to join in at his sister’s birthday party. Was he able to invite one of his friends? That often helps. The five-year age gap may also mean you have been asking him to help look after her, take on responsibility that he doesn’t want.

At home make sure there is a special time for him alone, maybe when his sister has gone to bed, when you can share an activity together – perhaps a game he loves but his sister always interrupts because she’s too young to play. Often when engrossed in an activity, children find it easier to talk about what’s affecting them.

Give him lots of love and encouragement. Be consistent – for example don’t allow something one day and not the next. Praise works much better than being constantly told off, so ignore minor strops but reward him when he is well-behaved. Simple things like star charts can be very effective.

This question answered by Anne Coates was first published in The Scotsman.