You are here: Home » Books: children & YA » High Rise Mystery by Sharna Jackson 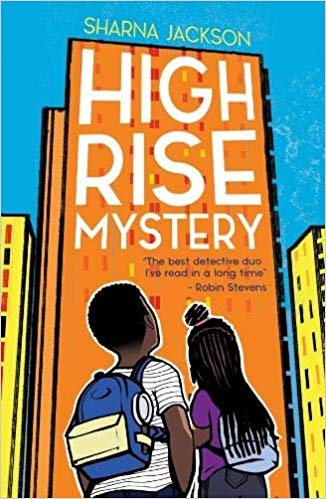 Sharna Jackson's High Rise Mystery has all the ingredients for a great crime novel. Only in this instance the two super-sleuths are young sisters  Nik (11) and and Norva (13) who not only find the body on their South London estate but realise that the father, the caretaker of the flats, is the prime suspect. Nik narrates the story which we see from the sisters' perspective.

It is one of the hottest summers on record and the sisters are ready for some sleuthing when Hugo, an antique-dealing resident, fails to turn up for the regular art class he runs for residents of the south London high rise estate. Nik opens a file as they they try to establish when Hugo was last seen. Apparently this was at a residents meeting when Hugo and the girls' father clashed over spending some money on the estate. Nik and Norva follow their noses – literally – when they discover Hugo's dead body that had obviously been sent down the rubbish shute in their block...

No one could fail to be captivated by these two young detectives who cleverly manage to get around police lines and investigations to carry out their own interviews and come to their own conclusions – sometimes following red herrings but always on a quest for the truth. The sisters complement each other like two sides of a coin. Nik is methodical and precise while Norva is creative and emotional – especially where the object of her desire Mark is concerned.

High Rise Mystery is a fantastic book for middle grade and YA readers (as well as adults). I love Sharna Jackson's writing – short chapters and realistic dialogue which drive the narrative forward. The cast of characters are all cleverly depicted through the eyes of our young detective duo and there are some surprises in store for them when people are revealed as not what they seemed to be...

The plotting is perfect and Jackson is adept at exploring ways her young protagonists can second guess the police investigation and solve the crime. This is the first in a series and I am  looking forward to reading the next instalment.

Published by Knights Of, High Rise Mystery is available from bookshops.