You are here: Home » Books: children & YA » The Princess Rules by Philippa Gregory

The Princess Rules by Philippa Gregory 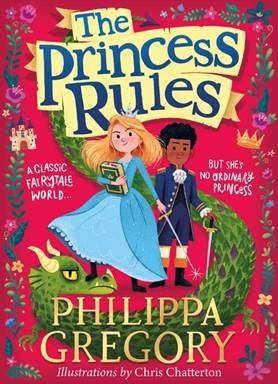 Originally published as Princess Florizella, and written by Philippa Gregory for her own daughter, The Princess Rules has been reimagined in this new beautiful edition for Philippa’s grandchildren. As current today as when her daughter was growing up, it is an anthem of independence for girls.

Princess Florizella may live in a classic fairy-tale world, but she’s no ordinary princess… She absolutely won’t be rescued by a handsome prince or dress the way anyone tells her to dress – and insists, instead, on going off on all sorts of amazing adventures paying no heed to the rulebook for princesses. As far as Fiorizella is concerned she is a prince with two extra s.

by Babette Cole picture books for younger children – but it's always good to have an alternative to a patriarchal narrative.

Philippa Gregory has written many hugely successful historical novels and is an advocate for feminism. Works that have been adapted for television and film include A Respectable Trade, The Other Boleyn Girl and The Queen’s Fool.