You are here: Home » Cinema/theatre/TV » The Snowman™ at The Peacock Theatre

The Snowman™ at The Peacock Theatre 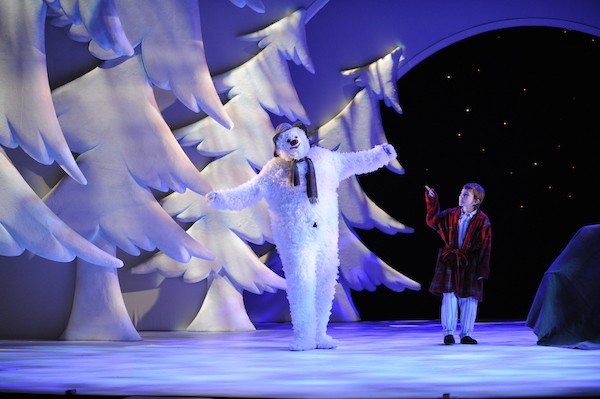 Saddler's Wells presents the Birmingham Repertory Theatre Production of The Snowman™ in London's The Peacock. Based on Raymond Briggs' classic children's boo, currently celebrating its fortieth year and the spectacular film, this theatrical show is will delight all the family.

The tale is the stuff of children's dreams – a snowman magically coming to life and befriending the boy who made him. This production is in the best tradition of Christmas shows practically perfect in every way. The theatricality is wonderful – the snowball rolled across the stage and getting bigger and bigger, the Christmas carol singers circling the the creation and then moving to reveal a fabulous snowman which the boy then dresses.

Harriet was entralled from the start. The Peacock is where we have previously seen My First ballets so it was lovely to be back in a familiar and welcoming theatre. The sets were creatively conceived and it was fun to see the house of the first scene transformed when the Snowman enters and explores to much hilarity. Feeling the heat, the snowman eventually recuperates in the freezer, before taking the boy for an adventure in the woods on a motorbike and sidecar. And then the first act concludes as he takes the boy by the hand and they are flying through the air to the sound of the show’s composer Howard Blake’s most famous tune, We’re Walking in the Air. ... I must admit I had a lump in my throat and the younger members of the audience gasped in amazement and waved in delight.

In the second act, the Snowman and Boy arrive at the North Pole, meeting two penguins and a variety of snowmen, the Ice Princess and the scary Jack Frost. When Father Christmas and the reindeer appeared there was a collective sigh of joy in the auditorium. Plus there is a special treat at the end which had the children running down the aisles.

Although familiar with the film and book I had never seen The Snowman on stage before and I enjoyed it. The dancing and mime is engaging and Harriet emerged from the theatre demonstrating her pirouettes and jetés.

A great show and a joy to watch.