You are here: Home » Cinema/theatre/TV » Behind the Beautiful Forevers – Vue Cinema

Behind the Beautiful Forevers – Vue Cinema 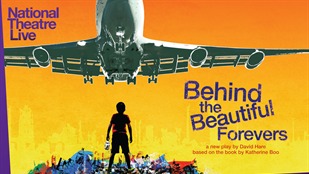 Based on  Katherine Boo's non-fiction book of the same name, Behind the Beautiful Forevers is a gripping production showing the true lives of the residents living in slum conditions. Meera Syal (The Kumars, Goodness Gracious Me) stars in this career defining performance, and is directed by Rufus Norris (Broken, London Road).

From the outside looking in, India’s future couldn’t look brighter. As the gloss and veneer of its leading business sector dazzles visitors, the hidden world of the slums behind Mumbai Airport hold the true lives of India’s poorest people. Behind the Beautiful Forevers explores the lives of several families living in poverty within this slum, all of whom have keen ambitions of their own. With her son Abdul, Zehrunsia is working to recycle enough rubbish to fund a house for her small family. Twelve year old Sunil wants to find enough to eat to help himself grow out of his stunted state. Asha aims to illegally use anti-poverty funds to transform herself into a “first-class person”. And Asha’s daughter, Manju, wants to become the first female graduate to hail from the slums.

Despite their determination, their plans are precarious. The garbage trade, upon which their livelihoods are built, is under threat from recession, while another resident of the slums makes an accusation that threatens to destroy the whole community.

I watch this filmed NT Live version spellbound. The cast is amazing and the sets dramatic. It is an altogether fantastic production now brought to a much larger audience through Sony 4K Digital Cinema which gives exceptional picture quality from every seat in the Vue Cinema.

This combines the best of cinema with live performance and you won't be disappointed.

Behind the Beautiful Forevers is suitable for teens aged 15 plus.