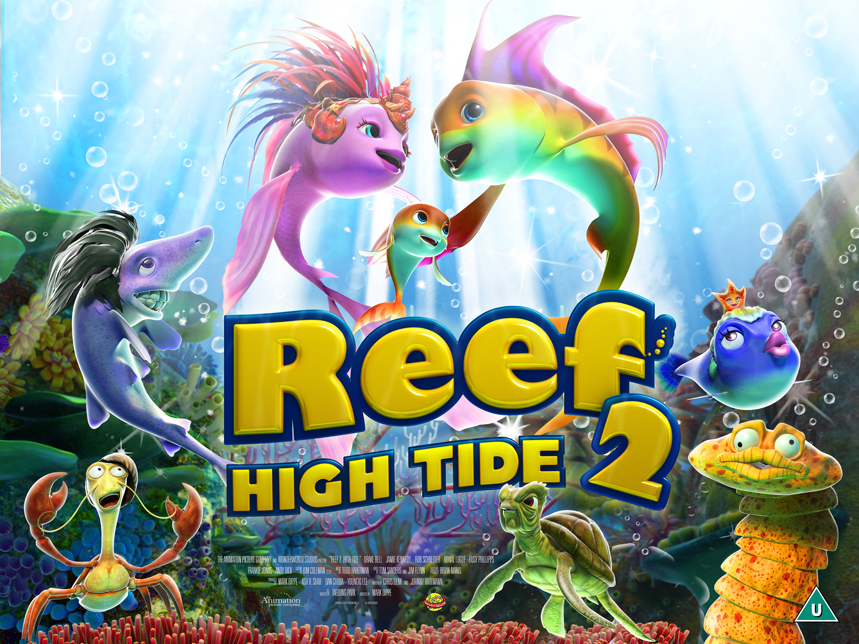 Reef 2: High Tide (an allusion to High Noon the iconic western starring Gary Cooper and Grace Kelly) returns to the under the sea world of Pi who in the the first film  defeated Troy, the villainous shark. Since then Pi has been been living the good sea-life with his beloved wife, Cordelia, and their tiny guppy son, Junior. But that’s all about to change when Troy, having been pumped full of steroids, escapes from a top secret Naval research facilityand, with several of his fellow sharksis about to wreak revenge.

Having defeated the bullying shark the first time, Pi tries to organise deputies to help him fight only to see his efforts fall flat when everyone’s attention is captured by a charismatic stranger, Ronny. In the hope of attracting humans and, in turn, scaring Troy and his shark cohorts away, Ronny wants to stage an underwater musical extravaganza. Frustrated and determined to go it alone in battle, Pi slowly comes to realise that everyone in the reef has a special skill they can use against Troy if they all work together.

Harriet wasn't that keen on Reef 2: High Tide basically because the film doesn't include humans. She loves movies but this one didn't captivate her the way others have, and I must say I found it a bit disappointing as well. The animation is bright and colourful but the storyline is predictable and suffers from being a Reef mark two.