You are here: Home » Books: children & YA » Reaching for the Moon by Katherine Johnson

Reaching for the Moon by Katherine Johnson 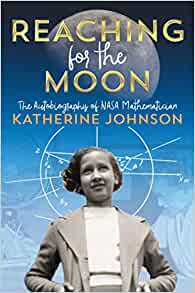 I loved the film Hidden Figures so was delighted to receive Reaching for the Moon, Katherine Johnson's autobiography of being a NASA Mathematician or as these women were initially called coloured computers.

From a very early age, Katherine had an aptitude for maths way beyond her years and at school skipped several grades. However her father had always taught her to remember: "You are better than no one else but no one else is better than you."

Katherine was born in 1918, a time between the World Wars when black Americans lived segregated lives, acutely aware of how white society regarded them. To be a woman and a woman of colour to succeed the way she did shows remarkable intelligence, clear-sightedness and determination. She overcame the harsh double challenges of racism and sexism to be a part of the team that worked on the Apollo mission that landed the first men on the moon.

This book, written in a self deprecatory manner, is a total inspiration. Throughout the author writes about her family, friends, church and colleagues in a kind a gentle tone. No carping or self pity – a genuine, talented person shines through the narrative.

She writes about her love for her first husband, and subsequently her second, her daughters and parents. Yet throughout we see a reflection of a society which is unequal, a society whose boundaries Katherine broke to pave the way for other women in science.

An Atheneum Book for Young Readers, published by Simon & Schuster, the book includes discussion points at the end which would be useful in a class environment.

Reaching for the Moon: The Autobiography of NASA Mathematician Katherine Johnson